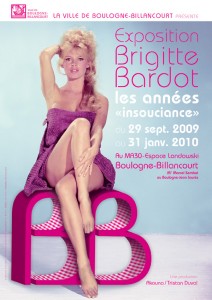 Sixties icon Brigitte Bardot is the subject of an exhibition until January 2010. “Les années insouciance/The Carefree Years” traces her rise and disappearance, from the coquette teenager to a somewhat reluctant sex symbol. In her prime, she was perhaps the best known European actress in the US. Some aspects of her life are now all too familiar to celebrities: notably the hounding she recevied for her marriages and divorces, as well as being mobbed at the Cannes festival in 1967. Ironically, it was not even for a film in which she appeared. “It’s an atrocious thing to remember,” she recently told CNN. “But it was to please my husband at the time, Gunter Sachs, who was showing a film made in Kenya, which I’m sure wouldn’t have been shown without my presence. That was 40 years ago, and I’ve never been back.”  She has lived not far away in St Tropez for many years.

The exhibition, at the Espace Landowski at Boulogne-Billancourt, features 2,000 photos, films and videos. For info, visit Akouma.