x
by Michael
on May 6, 2010
under Cannes festival, festival, people
∞ Permalink 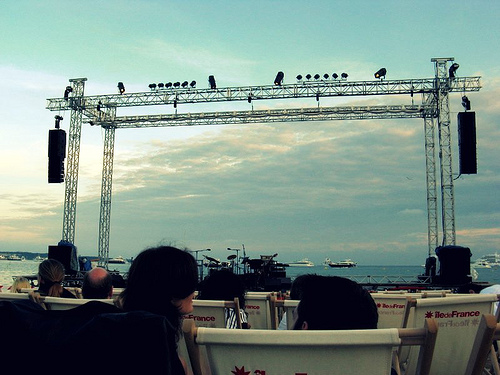 The aptly-named Cinéma de la Plage is a great way to catch movies in Cannes. The public beach beside the Palais is used to show a selection of classics or Cannes-related movies. The news in 2010 is that they will also be showing some premiers (of restored films). In previous years, tickets had to obtained from the tourist office. This year the event is billed as “free and open to the public”. Some films will be introduced (Mme Cousteau will be present at the screening of The Silent World) and at least one concert is foreseen. Films start at 9.30pm. Our tip is to get their on time and to bring a blanket in case it gets chilly.

THE 2 ESCOBARS
A documentary by Jeff Zimbalist et Michael Zimbalist (2010, USA, 90’). World premier with the directors in attendance.

THE NIGHT OF VARENNES by Ettore Scola (1982, Italy-France 150’). World premier of the restauration produced by Gaumont.

Screening to be announced

WOMEN ARE HEROES a documentary by JR (2010, 80’, France). Screening in collaboration  with the Critic’s Week.

ROCK ‘N ROLL… OF CORSE ! a documentary by Lionel Guedj et Stéphane Bébert (2010, France, 90’) – A World premier with the directors and Henry Padovani in attendance. There will be a concert on the stage before the screening.