x
by Michael
on April 4, 2011
under Cannes festival, people
∞ Permalink 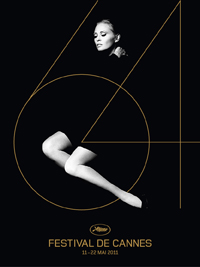 The poster for the 64th Festival de Cannes celebrates Faye Dunaway. The shot was taken by film-maker Jerry Schatzberg in 1970.

I’ve often wondered why a festival so dedicated to the future of cinema so frequently chooses such retro images. One reason – though perhaps not the best – is that it is impossible to choose a key image when the films are still being chosen. Festivals often use the strongest image from their strongest film as a poster. This is totally impossible in the case of Cannes. The very disparate style of films shown is another reason why it is difficult to take a thematic approach.

But one would think that with the graphic talent available in France, a more ambitious graphic policy could be applied.

So what we get is another slick shot of a movie diva. The irony is that the prizes and media attention often go to dark and alt films such as “Antichrist”. Go figure.

The actual reason Dunaway was chosen this year is that a restored copy of “Puzzle of a Downfall Child” will be shown at Cannes in the presence of the director and Dunaway before being released in France next autumn. The poster was designed by the H5 agency in Paris.