New Years Eve on the Croisette in Cannes promises to be spectacular. The most visible part of the night will obviously be the annual fireworks show that can be seen right across the bay. You can expect something impressive, as Cannes is also home to an annual firework festival that features some of the world’s best displays. The show starts at midnight. It is advisable to come by public transport or use the car park, as driving downtown will be extremely difficult. 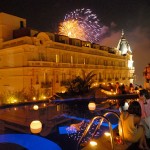 There are also plenty of plans afoot for parties on the Croisette and elsewhere in Cannes. The major hotels have sumptuous menus lined up for the night. The Baôli nightclub for jet-setters has a party lined up with music by DJs Ange Palmer and Gil Martin (book a table on +33(0)4.93.43.03.43).

The Palais will host the 19th Réveillon des Stars. You get showgirls, dancing, music and a choice between 3 menus from €165 to €209, or you can turn up just for the dessert and show for €85. This is a Lions Club Cannes event, so the proceeds go to charities.

Les Marches promise “crazy artists” at the 2016 Masquerade Ball. At the time of writing this, no further information such as pricing was available on the Marches site. They recommend making reservations.

The MonteCristo Cannes (20 rue Victor Cousin, formerly the Mo Ya, in the “Golden Triangle” area just off the Croisette) will have a party with DJ Azz, “heavy” guests, prizes and surprises. Reservations on 06 48 74 08 56.

If you’re not into heavy partying, you can still make the 31st a special night in Cannes, as the Spanish National Ballet (see video) have a show at at the Palais des Festivals on December 31 and January 1. prices from €34-55.

If you intend to make a long night of it, you might want to consider staying at one of the Cannes hotels. Prices are quite reasonable (check the Martinez and Radisson Blu).  See a selection of New Years deals in Cannes 2016.

And for New Years Day, I’d go for something ultra-simple: a long, refreshing walk along the Boulevard du Midi to get the oxygen pumping. The météo weather service for Cannes promises a clear day with a possible maxim temperature of 15°!

If you still want to eat, VegaLuna on the Croisette are having a special New Years Brunch on January 1, 2016.

Have I missed anything? Post your tips for New Years Eve below!