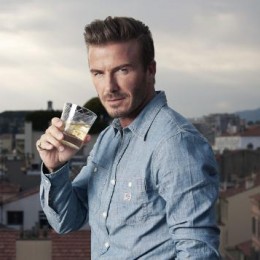 David Beckham was one of the celebrities on hand at the TFWA in Cannes this year. He was here to promote Haig Club, the new single grain Scotch Whisky developed in partnership with Diageo and British entrepreneur Simon Fuller. It is crafted using a unique process that combines grain whisky from three cask types. This creates a fresh, clean style that showcases butterscotch and toffee for an ultra-smooth taste that the company believes will be enjoyed by whisky experts as well as those who have never tried Scotch Whisky.

In September Beckham dropped into Changi Airport in Singapore to showcase HAIG CLUB cocktails, to the surprise of other travellers at the airport.

At the press conference, Beckham surprised more people when he raised his glass and then proceeded to touch glasses with the roomful of journalists and the waiters. But did they all have the patience to wait until he had done the rounds?

My source for this snippet is Andy Morton of Just-Drink. He noted lots of activity on the alcohol front, including an intriguing new “toffee vodka” (follow the link for more) that will be released some time in the future.

TFWA World Exhibition & Conference (TFWA) is the world’s duty free and travel retail industry trade fair. It is held in Cannes over five days for idea-sharing, business development and networking. The event is largely the only global event for professionals marketing to international travellers.