I hate to be so random, but there is simply so much happening at Midem that I end up catching music in between everything else. Coincidentally, chance again brought me back to Morrison’s. So tonight’s random oh-gosh moment was given by Canada’s Claire Mortifee.

Mortifee is from Vancouver and performs on her own and in different bands. She was very alone on the Morrison broom cupboard/stage running backing music from a pad of some sort. But I hardly noticed.

She appeals at different levels. First, one can’t help being struck by the powerful (but controlled) R&B voice. It allows her to play with soul, folk and hip-hop elements. 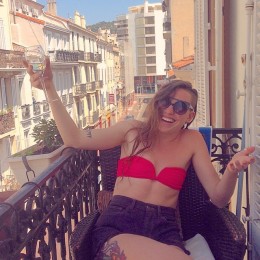 Mortifee puts everything on a very emotional level. She also has an extremely positive energy that commands attention. And with all that, she also comes across as one of the gang (except she’s singing in Cannes in a boob tube – but you now what I mean!).

She also comes across as very gutsy. Playing Morrison’s means playing to a room half-full of very noisy pissheads and half-full of people listening to the performance. Mortifee knew at all times which half she was playing to and they rightly loved her for it.

Her website is at Claire Mortifee, although you won’t learn all that much – except that she uses social media quite a lot. I hope to hear more in the future. In the meantime, play the video above and let it stream.

Oh, and Claire can busk!