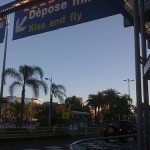 Participants at the MIDEM music trade fair should be ready to change plans at the last second. France is currently in turmoil, with massive protests due to proposed changes in labour laws. French trains in the south of France are already affected. But there is a possibility that air traffic might be affected in early June 2016.

According to a report in The Local, air traffic controllers and thousands of other workers at France’s airports have been urged to join a three-day strike early next month. The strike has been called by the USAC-CGT union and has the backing of all unions representing the 12,000 workers employed by France’s Civil Aviation body the DGAC and is scheduled to run from Thursday June 2nd to June 5th 2016 – exactly covering the MIDEM dates.

The DGAC has stated that this is a negotiation ploy, and that the strike is not yet confirmed. But it is estimated that if it goes through as many as 15% of flights in France might be affected, in addition to the ongoing rail protests.

Given the problems with rail travel, the best option in many cases might be to foresee quick changes to itineraries and the use of shared transport such as car pools.