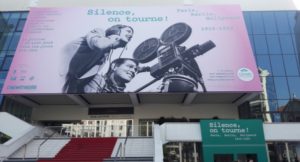 The Transient Cinema Museum is back in Cannes for its 4th edition, until the Sunday, August 26th, in the Mediterranean Hall of the Palais des Festivals daily from 2pm to 10pm. An organisation called Cannes Cinema and the city of Cannes have partnered to create an active museum/exhibition entirely dedicated to the world of the 7th art. A unique opportunity to discover this exhibition produced by the Cinémathèque Française and whose theme is the world of Cinema Studios: Silence, on tourne / Quiet on the set! Paris-Berlin-Hollywood, 1910-1939.

The exhibition traces the history of filming, decors and lighting. It also evokes forgotten atmosphere of the studios of the era of silent movies and the first steps of the talkies.

The programme: An exhibition built around 10 themes (such as technique, studio photography, the direction of actors,…) and 10 “Zooms” that showcase key filmmakers of the period.

Part of the exhibition is also devoted to photographer Gilles Traverso, with red carpet photos from 2018 and May 1968, “The highlights of the Cannes film Festival: 1968 and 2018”.

An important part of the event is the ability to partly shoot a short extract of a movie to get a better understanding of what is involved. Parents might like to know that there are workshops for kids.