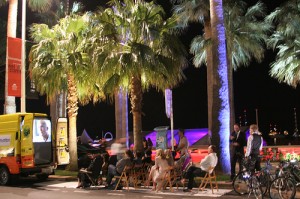 I remember trying to sell a corporate sponsor the idea of organising projections of short films in a large car or small van during the festival. It didn’t happen. But luckily someone else had the bottle to get up and do it without the corporate shilling.

Cannes in a Van is billed as the world’s smallest mobile film festival. They screen independent film at the Cannes Film Festival straight from the back of a yellow van parked on the Croisette. Shorts, features, festival reels and music videos; nothing is off-limits according to the site. Submissions are free and this year they are introducing the Van d’Or awards.

It’s a fun idea and worth supporting (and by the way, they also accept corporate shillings as sponsorship – see the site).  Photo courtesy of Flickr.