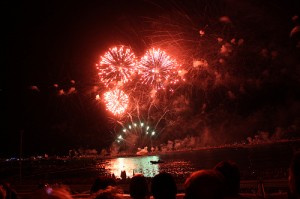 The Cannes Fireworks Festival (festival d’art pyrotechnique) has become one of the best of its kind, as well as being one of the first. Every year, participants present complete shows in July and August. The fireworks are fired from barges in the Bay of Cannes, to the strains of music with a background text, all structured around a theme.

Each of the six performances of this Festival is attended by some 200,000 spectators on La Croisette and as far as Juan-les-Pins, with the hotels often hosting receptions to view them from their rooftops. Boats can also be rented to view the shows from the bay itself.

Due to the coronavirus crisis, the 2020 edition was cancelled. But the good news is that it is going ahead in 2021. But be aware that the Cannes Film Festival is still running. So you can expect big crowds on the night. It’s advisable to check and follow the traffic and transport recommendations on the night itself. Cannes is a small town with narrow streets. Getting to and from viewing spots can be very difficult.

Every year, the winner of the event receives a Vestale d’argent awarded by a jury, which bases its judgement on the originality of the theme and the elements presented, the staging, the quality of the musical illustration, the synchronization, colours, firing cadence and the general rhythm as well as the construction of the programme. Firms from all over the world vie to obtain this peerless recognition by professionals and the public. Concerts are also organised on the night.

Firework shows in Cannes for 2021:

The shows will run every Wednesday from July 14 up to August 24. The opening night show on July 14 is the French national holiday. The theme is “Red Carpet”, with music from major movies such as Capharnaum, La Dolce Vita, Slumdog Millionaire and others. The show kicks off at 10pm.

The question is often asked, “Where is the best place from which to watch the Cannes firework festival?” Very quickly, people suggest renting a boat and watching them from the bay. That is certainly spectacular. But Cannes veteran Lao Smith thinks otherwise: “The shows are pretty carefully choreographed to be seen from the Croisette, specifically between the Carlton and Martínez hotels where the judges and VIPs sit. Viewing from an angle or behind you lose most of the effect.” This involves getting into place well in advance.

For more details, visit Cannes Firework Festival. Follow Cannes or Bust or our Twitter account for the latest news, dates and deals about the firework shows.