x
by PFitzp
on January 14, 2016
under hotels
tagged accommodation
∞ Permalink

Radission Blu 1835 Cannes joins the ranks of the palaces

Since January 14, Cannes has a 7th hotel with a 5-star rating. The Radisson Blu 1835 joined the prestigious list of Cannes hotels that offer the highest level of comfort. The hotel has been working towards this award since 2014, as part of an ongoing upgrade of the hotel, which was previously known as a Sofitel and later the White Palm.

The Radisson Blu 1835 Cannes was designed by Marc Hertrich and Nicolas Adnet. In addition to 133 stylish and bright guest rooms, it features 6 meeting rooms and 3 restaurants. “Le 360” is situated on the roof terrace offering, as the name implies, 360 degree views of Cannes, the sea and the bay over to Mandelieu and beyond. “Le Bio” is located within the spa, specializes in healthy dishes and offers a unique “Bento Box” concept. “30(°)Celsius” serves light meals on the ground floor. 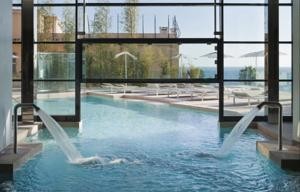 An important attraction in the hotel is its spa, to which the managers attribute some of the credit for achieving 60% occupancy rates. The 5-star rating is confirmed by the reviews on sites such as Tripadvisor and seriously distances the hotel from sites such as AirBnB for accommodation in the festival town.

The Radisson Blu 1835 Cannes is located on the tip of the Old Port, about a 20-minute walk from the Palais or a short ride by bus from the gare routière near the town hall. In addition to its views, the hotel offers joggers an excellent location for morning runs along the relatively quiet Boulevard du Midi.

Still hesitating? You’ll find broader tips about staying in Cannes at Cannes: Where to stay.