x
by Michael
on January 31, 2010
under cannes
tagged beach
∞ Permalink 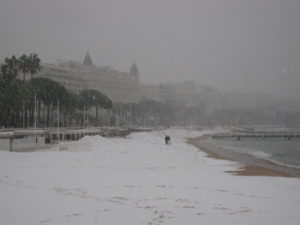 This is weird. It’s snowing in Cannes!

Everything seemed to slow down on Sunday January 31 2010, when huge snowflakes started falling on Cannes. This shot of the famous beach with the distinctive towers of the Hotel Carlton in the background is from Mikael Rousson, via Twitter.

The previous May, the Carlton was turned into a winter wonderland to promote “A Christmas Tale” during the Cannes Film Festival. But no, this wasn’t another publicity stung. It was actually real snow! It’s odd, as Tweeters from Nice noted there was no snow there.

Just a few hours later, the sun came out and everything was back to normal.