x
by Michael
on April 26, 2013
under Cannes festival, events
∞ Permalink 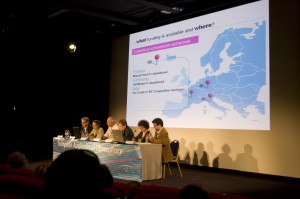 The European Audiovisual Observatory has announced the theme of its annual Cannes workshop during the Marché du film.

The open workshop will look at the increasingly intimate relationship between the film industry and the new distribution possibilities offered by the internet. Do they make good bedfellows? Just how close can they get and what are the benefits on the side? Given the complex partnerships that go into producing movies, the Internet has so far been best known as an effective marketing tool. But what are the possibilities for making a serious impact on distribution?

Accompanied by a panel of leading media experts, the Observatory will be asking:

The French CNC will present its latest study on the role of Internet and social networking sites in the marketing of films. This workshop will take place in English and French with simultaneous translation.

The Observatory workshops are generally of a very high level, with  their observations based on data rather than opinion.

For details and applications (required) visit the Observatory website.