A freak storm that hit the south of France on the night of October 3, 2015 caused at least 16 deaths with several others still missing the following day. “I think that we can expect some grim discoveries over the coming hours,” said the mayor of Cannes, David Lisnard.

The downpour started late in the evening, lasting only two hours. But in that time, the average monthly rainfall for the month of October was unleashed – roughly 10% of the annual rainfall for the region. 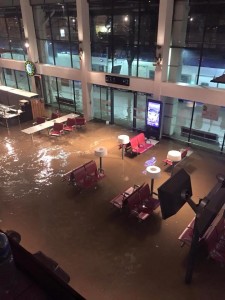 Very quickly, all the drains and streams were flooded, leading to apocalyptic scenes as the rain spilled off the hills, across the motorway and railway tracks and into the sea.

Cannes, like other towns, in the region was quickly completely submerged, with the station and other areas flooded. Streets with slopes rapidly became cascades, with cars, street furniture and bins swept away. People had to be rescued from trains caught in the deluge.

On a sinister note, scenes of pillage were seen, with several shops being emptied in the mayhem; Several arrests were made, but most could not be dealt with.

Up to 500 tourists, mostly British and Danish, had to spend the night at Nice airport and hundreds more were stranded for the night at a concert venue after attending a show by French star Johnny Hallyday. 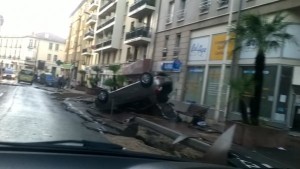 Cannes: the day after the flood

Apocalyptic scenes the day after

The day after the storm, people woke to scene of devastation, with cars strewn around the streets. 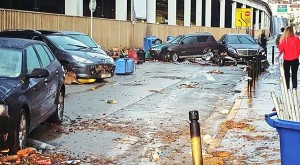 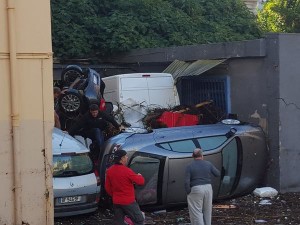 What could have been done?

After the storm will come the questions: what could have been done? Freak storms are not all that rare in the region, and there are often complaints that the urban planning of previous decades has made things worse. “An orange alert had been announced,” said Lisnard. “Objectively, it could have been green or red, given the volumes of water I don’t see what more we could have done.”

It is advisable to check the state of the roads and rail before travelling.

MIPJUNIOR and MIPCOM: business as usual

The MIPJUNIOR and MIPCOM trade fairs, running at the moment, are still operational. As the Hotel Martinez was flooded, however, several conferences and MIPJUNIOR screenings have been re-programmed. Chec the Twitter accounts MIPCOM and Cannes-or-bust for updates.