x
by PFitzp
on January 11, 2017
under Cannes festival, people
∞ Permalink

Thierry Frémaux, the director of the Cannes Film Festival, will be in town on Monday January 16, 2017 for a double event. He will be presenting his new book on the festival, called Sélection Officielle (published by Grasset), and a film called Lumière.

Coincidentally or not, Lumière is the name of the documentary directed and narrated by Frémaux. It looks at the work of the Lumière brothers, who invented so much of early cinema, from the actual technology to the first travelling shots.

As Cannes is celebrating the 70the anniversary of its festival, a number of events have been organised. 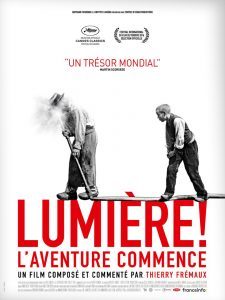 – 16 h: Masterclass of Thierry Frémaux, director of the Cannes Festival.

-19 h: projection of Lumière, a film composed and commented by Frémaux, in the presence of the director.

Frémaux is obviously a good source of quote about movies. In 2016, he had this to say about the Cannes selection process. “I have my share of work, which is also about seeing lousy films. And there are a lot of them. Of the 1,800 [submitted] films, not all of them are great. We have three selection committees: a foreign committee, a French one and third one for other films… A lot of people are quick to point who is missing from the selection. But most often, we just decided that it wasn’t good enough – and we’re rarely wrong. Every year, if you look at the Césars and the Oscars, there are a lot of movies from Cannes.”