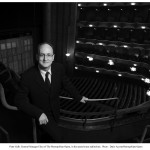 Renowned manager of the New York Metropolitan Opera Peter Gelb has been announced as the keynote speaker at MidemNet, part of Midem 2010 in January next. He will be talking about his ambitious programme to broaden the Met’s audience and will notably use his keynote to outline how new technologies have revitalised the Met, both widening and monetizing its audience.

Gelb came to the post in 2006 after a tumultuous career in artist management and Sony Records. He has since created multiple distribution modes via live HD broadcasts in cinemas, the Internet, satellite radio and mobile platforms. He actually started his career there as an usher at the age of 17.

The Met, which recently celebrated its 125th anniversary, has also reached out to a younger, broader audience with the introduction of public rehearsals, “last minute” tickets at $20, and the launch of the collection “The Met: Live in HD,” winner of the Peabody and Emmy Awards.

This year’s MidemNet is free for MIDEM participants and its presence will extend throughout the MIDEM music market and conference, with workshops and showcases for digital start-ups. MIDEM, part of the Reed MIDEM group, runs from Jan. 24 to Jan. 27 2010. For details, visit MIDEM.