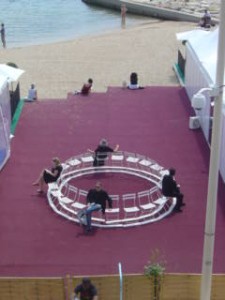 “Where is the Cannes festival being held this year?” OK, you’ve probably read this quote so many times already you are sick of it. I am. Was it really said by Britney Spears or Christine Aiguilera? I’m not even sure. The quote just keep spinning around the web.

“To hoover” is also a verb in Ireland. So how long is it before Cannes becomes a verb? Which one would it be? The verb, “to attend a trade fair”? Or the verb, “to spend some time on the Riviera”? To do deals? To go on a jolly? To shimmy up the Croisette? Would you say, “I’m going to cannes over to London for a few days”? Or, “How about cannesing to Venice for the festival?”

iPhones, databases and not leaving home
The question is all the more relevant as with the rise of databases and social media, Cannes has become pretty much a 12-month event. You can tap into the Midem or Cinando databases and do business with people that were at Cannes right around the year. Many of the events have iPhone apps that let you participate without leaving home. To make things even more complex, many of these trade fairs have larger and larger overlaps, as filmed content can be found at MIPDOC, Cannes Lions, the Cannes festival MIPTV and MIDEM, and music is at all five too.

Will it one day just become one big blob of an event that runs like a convenience store? Or a smaller one held every weekend like a car boot sale? As trade fairs and festival begin to morph and adapt to the new business landscape, Cannes will have to define itself too. And I know just what to call it: Cannes.