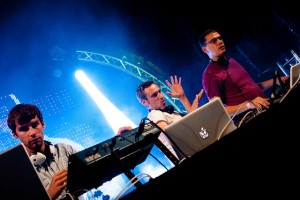 Closing night at the Plages Electroniques festival was dubbed the Minimal night, featuring local heroes and the German duo Tiefschwarz. Unsurprisingly, the grooves were pretty pared down, sometimes close to old school electro. But before talking about the music, it’s worth mentioning the festival itself. The Plages Electroniques is France’s only beach festival, held right under the wing of the Palais des Festivals. As this is a very public beach, the organisers have to set up and dismantle the stage and facilities every single night, so bathers can enjoy the beach unimpeded during the day. It has also become of the south of France’s key events, drawing electronic music fans from far. The crowd is incredibly up for the vibes, creating a party atmosphere.

First up has H-Tenza, who refers to Italo-House and disco as references, although that is not apparent when you check his tracks. Personal favourites were Sw4p Ctrl, a four-piece outfit that build tracks live on stage. I was reminded of Jeff Mills in that there are lots of layers, but the sound is brighter and less abrasive. Local hero Nicolas Massayeff got a great response from the crowd, although I fond the style a bit too streamlined. But it certainly hit the right spots with the audience. The German duo Tiefschwarz rounded off the night, with a set that was indeed very minimal.

For a review in French, see photographer JeanSébastien Zenachi’s Good Karma site. Plans are already being made for next year’s edition, plus editions in Martinique and the Pistes Electroniques in Isola next April.