x
by Michael
on October 18, 2013
under events, festival
∞ Permalink

This year’s Festival de Danse in Cannes (Nov 19-24, 2013) looks like being a vintage. Under the artistic direction of Frédéric Flamand, the festival will feature a very strong international programme of contemporary dance. Audiences can enjoy 16 dance companies, one world premiere and five French premieres. 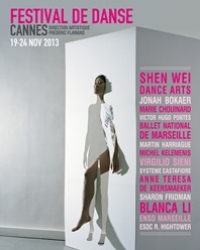 In the words of Frédéric Flamand: “In 2011, I suggested a theme for the Festival de Danse de Cannes: new mythologies – or how ancient myths have returned to our modern world with the emergence of new technologies and the dominance of the image.  It was also the moment to reflect, across very diverse choreographic works, on what makes us human, on dance as a way to take back ownership of our bodies at a time when our sense of identity is following the changes in spatial organisation.”

events around the Cannes Dance festival

In addition to a very high-caliber selection of performances, the Festival de Danse will also extend itself into the town as well, as numerous encounters and workshops are foreseen. There will also be special school programmes. Given the variety of styles, this is a festival that really does have something for everyone. From the surprising robots of Blanca Li to the hypnotic febrility of Anne-Teresa De Keersmaeker and not forgetting the movie-like panache of Frédéric Flamand’s “Titanic” (photo by Pino Pipitone), it is a festival with a strong link to the outside world.

During the Festival, the Rosella Hightower International Dance Academy is offering people a pretty unique opportunity to participate in Master Classes with the participating  dance companies in the festival.

Registration fees for a Master Class: €12