x
by PFitzp
on February 21, 2015
under Midem
tagged Midem
∞ Permalink

The Midem trade fair will again be seeking out the most innovative and promising music start-ups June 5-8 2015 in its Midemlab sidebar. Sponsored this year by Pepsi and Vivendi, the pitch platform seeks to reward the most innovative start-ups that offer solutions that enable creative industries to build new consumer experiences – and revenue-generation would help as well! 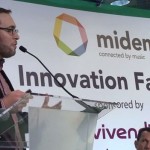 Midemlab has established its reputation on finding highly innovative companies and applications. Companies such as Echo Nest, Songkick, SoundCloud (which won the inaugural event) and even Spotify have featured here. Past winners include Rexly from 2012 (acquired by Live Nation), Soundrop from 2013 who went on to raise a $3.4 million series B round, and Blitzr from 2014 which is currently the biggest free music base in the world with 40 million songs available for free, 4 million artists, and 5 million albums.

The format is the various startups give pubic pitches and are then quizzed by the experts (see the video from 2012). This year, the competition will be structured around 3 categories:

A previous participant, Michael Penfield of Fandistro, said: “We had in-depth discussions with artists, managers, labels, and other tech companies, received great feedback and have embarked on a number of partnerships – all as a result of our participation in Midem.”

Startups that focus on music, live events or other creative industries should register before March 5, 2015. For more details, visit the Midemlab page on the Midem site.

For tips about attending Midem, check the Cannes Starter Guide.