Until December 11, 2016, the SNCF will still run a daily direct train between Brussels and Nice. But after that, the last stop will be at Marseilles. So travellers to and from Cannes will have to change trains at Marseilles.

Obviously, there has been some resistance to this, as direct trains are an incredibly handy way to travel. But for most people, the end of the direct train will make little difference. For one thing, it changes little in the time it takes to get from Brussels to Cannes, which is on average about 8 hours whether you change trains or not. Also, if the times of that single train didn’t suit you, you’d have to change at either Paris or Marseilles anyway. 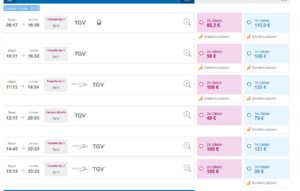 Alternatives to the TGV train to Cannes

What is the obvious alternative? There are some 10 direct flights from Brussels to Nice airport if time is an issue. And if you are travelling last-minute, the flights are often cheaper than the train.

It is also possible to get a lift via Bla-Bla Car, although the trip takes about 12 hours (depending on traffic).

So the impact on most travellers is minimal.

For those that still prefer the train, my only advice is to choose to change trains at Marseilles rather than Paris, as the Paris stop involves you changing stations which is an incredible nuisance if you have suitcases.

Last thing: at the time of writing there are some good prices on the weekend of December 10 (see photo)!