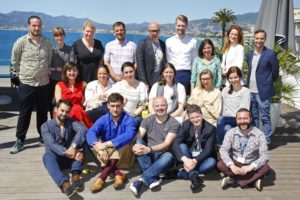 European Film Promotion (EFP) just announced 20 up-and-coming producers selected for the 18th edition of EFP’s networking platform PRODUCERS ON THE MOVE (May 19 – 23 2017) at the Cannes Film Festival. These promising young producers from all over Europe are taking part in a tailor-made programme to exchange experiences and join forces for new trans-national co-productions.

The programme includes a case study for the film “Directions” with director and producer Stephan Komandarev (PoM Bulgaria 2012) and producer Vladimir Anastasov (PoM FYRoM 2010). The Bulgarian-German-Macedonian co-production premieres in this year’s “Un Certain Regard” section of the festival.

Picking up important trends in the film industry the event also includes a session on content for virtual reality followed by a meeting with ARTE’s Kay Meseberg (The Head of 360 /Virtual Reality). Financial backing for PRODUCERS ON THE MOVE comes from Creative Europe – MEDIA Programme of the European Union and the respective EFP member countries.

But why bother with them? Writers and actors that want to build their network should immediately contact their local PoM and try and found out what they are up to, and if you can be of any help to them. To make things easy for you, I’m including all their names and countries ;-).

Get more info about the EFP and Producers on the Move on their website.