x
by Michael
on September 15, 2010
under mipcom, people
∞ Permalink 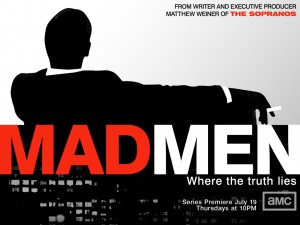 The first MIPCOM World Premiere TV Screenings on October 4 in Cannes, France will open with a special screening of Lionsgate’s multiple Emmy® Award winning “Mad Men” and the international debut of “Running Wilde.”

The MIPCOM World Premiere TV Screenings is a showcase for television and film companies to screen programmes to influential buyers, industry players, and international media from over 100 countries. The inaugural event, to be held in the Palais des Festivals’ prestigious Grand Auditorium, is open to all MIPCOM delegates and will present an unaired episode from the 4th season of Lionsgate’s hit drama “Mad Men.” The event will also welcome cast members of the series which won the 2010 Emmy® Award for Outstanding Drama Series and Outstanding Writing for a Drama Series. Created and executive produced by Matthew Weiner, “Mad Men” airs in over 100 countries worldwide. The 4th season launched in July 2010 to stellar ratings.

The premiere will be preceded by the first international preview of the second episode of Lionsgate’s new romantic comedy, “Running Wilde” from the Emmy Award-winning creator and the star of the critically acclaimed FOX series, “Arrested Development”.