x
by Michael
on September 26, 2010
under mipcom, MIPDOC, MIPTV
∞ Permalink 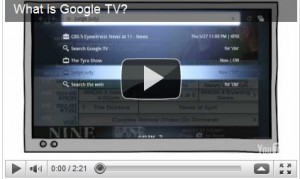 In the run-up to the MIPCOM 2010, there has been increased talk about Google’s move towards interfacing with the web. Should we worry about this? On the face of it, Google TV looks like a tempting prospect. Described in over-simple terms, it brings search facilities and web connections to the TV screen, creating a more integrated experience.  In principle, finding and managing content will become more easy for the user. Twitter could be running alongside a news programme or talent show, for example. So far, so cool.

But the service also opens up many questions. This is the sort of approach that Philips would have pursued in previous times, and there are already several services that provide web connectivity (the PS3 immediately springs to mind). But how will a TV set integrate web images, such as buttons and text? What will happen if a family – or a whole neighbourhood – has everyone on the web at the same time and also watching movies? Will bandwidth support this? Several VOD providers already had problems with this as they don’t control the whole distribution chain. Will the major broadcasters such as BBC that are already working on variations of the theme be willing to play ball?

Just like with music, some pundits are already hailing the arrival of a open market for consumers’ eyeballs. Who cares if you don’t get airtime on a channel when you can go direct to the viewer via Google TV? If I was a producer, I would definitely care. Broadcasters pay rights and commission programming. What will happen in thes new environment?

The experience of music

The experience of the music industry is that in an open environment like this, the only ones that can afford to fund major productions are the companies that are already sitting on top of the pile. The idea of producers being able to reach out and monetise their creations to millions of people worldwide is, frankly, a pipedream. The cost of producing a “Mad Men” leaves little room for improvisation with your business plan. The music industry has seen a concentration of producers at the top (often associated with TV show, incidentally) and a dramatic thinning out of the all-important mid-sized companies.

The prospect of web TV is an interesting one. But until a new financing model is developed, it could ultimately spell bad news for independent producers in the mid term.