x
by PFitzp
on December 16, 2014
under trains
tagged travel
∞ Permalink 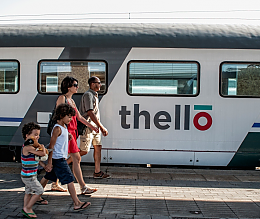 UPDATE: As of July 1, 2021, Thello has cancelled connections between Marseilles and Milan (and therefore Cannes as well). There is talk of a new high-speed connection, but no details are available. The Oui service from SNCF is still available. Current prices are at about €40 one-way.

A surprising number of people arrive in Cannes through Milan. So they might be interested to know that a new train service now connects the two cities.

Since December 2014, the private train provider Thello has been running a daily train service between Marseille and Milan, which obviously stops off at Cannes. For about EUR50 (second class) and EUR65 (first), the prices are reasonable.  Prices from as low as EUR35  have been announced for bookings of a week in advance or over. However, the train takes over 5 hours.

It is also possible to buy connecting tickets with the SNCF and Trenitalia. The company is currently running a 50% promotion for ongoing trips to a range of Italian cities.

The train to Milan currently leaves Cannes station at 17:37 (advisable to check).

The joy of trains is the city-to-city convenience, bypassing the hassle of airports and the taxis needed to reach them. This is particularly attractive when you factor in the 30-45 minutes to reach Nice airport from Cannes, the early check-in times and the journey from Milan airport to the city. A spokesperson said that they will be trying to reduce the travel time over the coming months. Even at EUR50, the train is cheaper than most ways of reaching Nice airport from Cannes (unless you follow our advice).

Thello is a joint-venture between the Italian national railways and the French company Transdev. They also run night trains between Paris or Dijon and Venice.

For details and bookings visit Thello.

If you have used the service already, please feel free to drop a note about it.