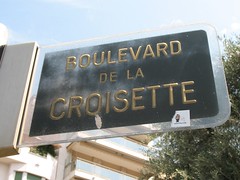 On the face of it, it was an inventive idea. But the face has soured. According to a report from Reality Check, property company Drivers Jonas has been fined €100,000 for setting up shop in the Pavillon Croisette restaurant in Cannes rather than taking a stand in the Palais des Festivals at a cost of €7000. MIPIM sued them for “parasitical” behaviour. They had originally claimed €300,000 in damages.

Organisers Reed Midem exert quite an influence on the town. Other events are also very protective. During the Cannes film festival, for example, people without a badge cannot enter many of the major hotels.

They take these things seriously in this town.

Squatting a restaurant looked like a great idea. But I doubt they will be trying it again any time soon. There’s a clear  line between entertaining people outside the Palais and riding piggyback on a major event. If you’re attending Cannes and want to organise something like this, my tip is to play safe and take passes to the event in addition to entertaining in the café/restaurant/club. The key point seems to be that they were not even registered with MIPIM, and were therefore perceived to be leeching the event. MIPIM further argued that it was not fair to the people that pay for entrance fees and services.